Five months later I’ve managed to resurface a broken woman, or perhaps better described a zombie. Albeit, a more capable zombie, who is so very blessed with a beautiful and healthy five month old baby boy. Clichéd as it is to say, he is worth every sleepless night. That says a lot considering there have been over one hundred of them, and counting! 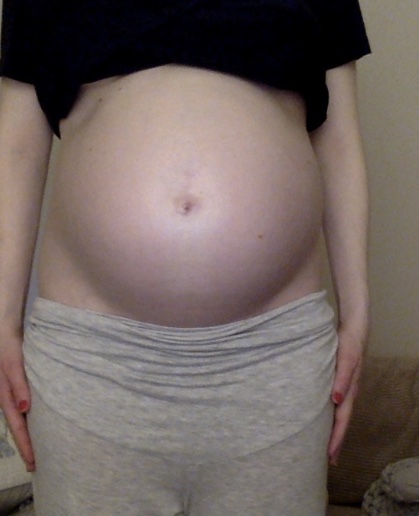 Photo: Me AKA beach ball body, 16 days before giving birth.

If I could give one piece of advice, indeed any words of wisdom to a first-time expectant mother, they would read something like this. Nothing will prepare you for the mind and body **** you will face. Since these are neither welcome nor constructive words, I will attempt to impart (because clearly I’m an obnoxious expert at this point) ten pieces of advice.

1) Plaster a smile (a vacant look will suffice if it’s all you can muster) across your face, and nod your head (but absolutely zone out) when the millionth person ‘kindly’ but unwisely advises you to ‘sleep when the baby sleeps’. My god I could have done some serious damage…at the very least head butted a number of individuals, close and strange to me alike, that pushed this mantra.

2) Don’t listen to the BS advice pedelled by maternity sites authored by desperate housewife-esque/’adored my pregnancy’ type women, which recommend batch cooking and the freezing of meals in the run-up to your EDD. Sure, this is great advice in theory. However, unless you adore cooking and/or have a penchant for running yourself into the ground (literally!), who the hell at 35+ weeks pregnant has either the energy, inclination, or even ability to stand and cook anything more than toast, without suffering a series of incapacitating braxton hicks, and swollen feet?! Also, you’ll have no time when baby is here to just be you (my ‘self-care’ is a three minute shower whilst baby sleeps, or if I’m lucky a face scrub in the shower), so just be you, and do yourself a favour by buying tons of frozen meals from Cook (not sure if there’s a US equivalent?!), and a few bags of leaves. Along with iron supplements aplenty (bring on the constipation!), and that will see you right.

3) Mentally categorise people you know into two groups. The first group will be your list of skivvies, who you’ve lined up to help out during (at least) the first twelve weeks postpartum. You can form said group by roping in your mum, female family members, friends or even dad (mine was an expert at singing baby to sleep). The second group will include individuals who will show up (not in the least bit concerned about your welfare) wanting to hold baby (even when baby is asleep for the first time in hours). This second group is not WELCOME….again at least not for the first twelve weeks postpartum…or ever again…seriously, who doesn’t care about mum after she’s been taken to the brink and back?!

4) Politely direct mum/MIL/aunt/family friend to the new advice on sleeping, nursing, weaning, crying, and the like. Meanwhile, secretly delight in the fact you too will one day be preaching outdated advice to your daughter/DIL/niece/family friend. Try to remember that deep down your female contingent only mean well… After all, you know no better/worse, and wish no more/less for your baby than the millions of women, including aforementioned female peers, who have preceded, and will succeed you.

5) Everything is ephemeral, and this too will pass (caveat: unless you decide to have another, and another…but by then you’re basically a pro/head case and it’s all okay anyway). Albeit, after many tears, hormonal outbursts, and arguments with your worse (trust me you’ll shout this a few times in the process) half.

6) Breastfeeding will be horrendous for the first 24 hours after your milk arrives. Sure you’ll wake up with pornstar boobs (and possibly stretch marks aplenty) when your milk comes in, but nursing will initially feel sadomasochistic. During the first hours after mine came in, I would literally feed baby whilst crying for the pain. Now? I absolutely love breastfeeding. It’s been one of my favourite things about motherhood. It isn’t everyone’s cup of tea, but if it works, it really works. Nonetheless, we as women must let everyone do what’s right for them when it comes to feeding. This means dropping the preachy act, and ‘breast is best’ mantra because my goodness motherhood is hard enough without lecturing your fellow woman on how to nourish their baby.

7) Poonamis and milkanoes are a very real phenomena. It’s in your best interest to get a nappy bucket (cheap one off Amazon will see you right), not give a s**t (since there will be plenty, literally), and for goodness sake, if you see the milk resurfacing, ensure to save baby’s clothes over your own. A two-second top change or wipe down with a water wipe (trust me your personal standards will drop considerably!) beats twisting and manipulating little limbs into a minute vest any day (or night…since initially you’ll see lots of vomit between the hours of 11pm through to 5am).

8) Accept that you’ll never have your s**t together ever again (N.B. If you never did, then you’re well on your way to becoming a mum, or imploding), and that it’s okay to have a never ending to-do list consisting of at least one of the following items at any given point in time: restock nappies, take baby to weigh-in, buy water wipes, and empty nappy bin. Of course if you’re blessed by the gods, or rather with money, then you can afford a maternity nurse. Then you can kind of pretend you don’t have a kid, and do have your s**t together, at least until her day off of course!

9) Watch Workin’ Moms on Netflix. It’s brilliant! Plus, you can pretend you’re not a negligent mother when you’ve failed to do the assigned duration of tummy time for your baby’s age group…yes it’s a thing.

I'm 28 years old, married to Richard, and mum to a baby boy! I am obsessed with decluttering, and love the countryside, food, poodles and mascara!